Oh, this boy. I took my 2 littles to the doc to get caught up on some immunizations, with the promise of a milk shake if all went well. I mean, really, the promise was just for Bryce because what's worse than seeing a tiny babe crying over shots is seeing a 5 year old boy freaking out over shots. But, he was cool. No tears at all, which is a first for the clowers boys.

But the little one - man, he's funny. After carefully picking out his prize at the dr. office ( a plastic turtle) he was hell bent on walking out of that place on his own. Which, fine whatever, but once we got out to the parking lot, I needed either his hand or his body to pick up and he wouldn't comply with either option. Like, he threw a fit the size of Texas and people were staring. So I picked him up and strapped that crazy in his car seat, screams, tears, kicks, and all.

Next stop was for the milk shake. I figured Nash and I could share so I ordered one for Bryce and one for me/Nash. Except Nash wasn't having any of it. Now, i was driving so this was only going to work if he was willingly handing me the milkshake when i reached back for it while stopped at red lights. The little stinker wouldn't hand it over at all: every time I asked for it, he would say, NO!, and hold it farther away from me. And his little sweet face was so serious. Really, it was just adorable and hilarious. So, obviously, I just let him have as much as he wanted- which was all of it.

And then he and Bryce both fell asleep. And it was quiet for 30 minutes while I drove home, so I did the only thing every mom does who is basically alone: turn up the tunes and sing loud. 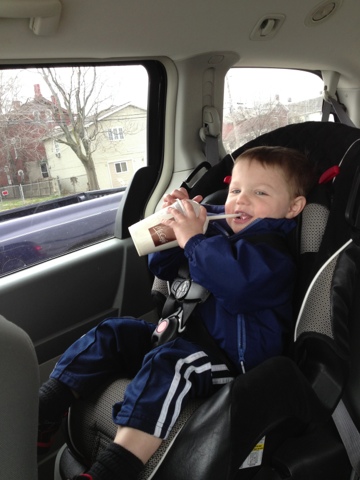 I just recently moved into the 21st century with a smartphone. I sent my husband to get a go phone and he came back with an iPhone! I was pretty shocked...and for those who know me personally know why: I hate cell phones or just being on the phone period and I am constantly leaving it in an unknown location OR I forget to charge it. ...but who knew iPhones were so fun! I downloaded the blogger app and am trying it out. I had to take a milestone pic of Triston's first poster project at school. I've been waiting forever for the fun projects to start! he chose red eyed tree frogs. It turned super cute and we learned some pretty cool facts! 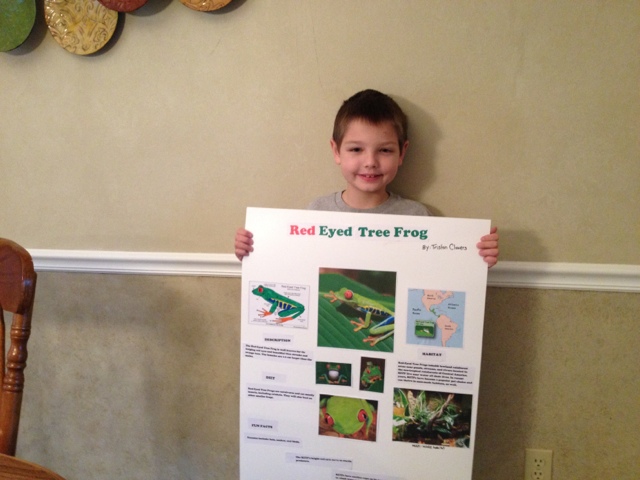 things not to do with your children

it certainly was not my best parenting move - in fact, it was probably one of the worst.

here's the deets: we're watching afv and they have a segment on people's reactions to a scary face that flashes during an online maze. i thought it was probably like a zombie or something. they never show the video that the people were watching, but watching their reactions was hilarious. like, me and the boys we're almost crying it was so funny.

and then jackson pipes up with, "hey, let's look it up!" and i, being an experienced mother and all, should have right there said, "no way. i wouldn't want you guys to feel scared!" but instead i said, "yeah!" what the HECK was i thinking here?!

so we looked it up and it was a little too easy to find. the maze is kind of hard for a kid - with your mouse pad you have to move this little dot through a maze without touching the sides or it will start over. so jackson is really in to it and me and bryce are watching intently. and we know a scary face is going to flash at any given time, but we got absorbed in trying to get through the maze.

and then, it happened. and it wasn't just any scary face and it certainly didn't just flash and go away.

it was the exorcist girl, like from the movie, up close and personal. and it didn't go away. so when it happened all three of us jumped backwards and starting screaming. finally, like 10 seconds later, i stopped screaming, came to my senses, and slammed my laptop down. and bryce and jackson stood there for another 5 minutes screaming and crying.

obviously, nash started crying because we freaked him the hell out with all of our screaming. so he was holding on for dear life around my neck as i was trying to calm down j & b and they weren't having any of it.

longer story short: we had some ice cream, watched a funny cartoon, said a prayer, and two boys slept right in between travis and i that night. and i've had to leave the bathroom light on every night sense. and i'm not going to lie here, i've been a little jumpy myself, too.

moral of the story: don't be stupid with the internet. sheesh.

yikes. thank god i was never interested in drugs. i would be the worst addict ever.

oh, wait. i am a stay-at-home-mom so that doesn't matter. 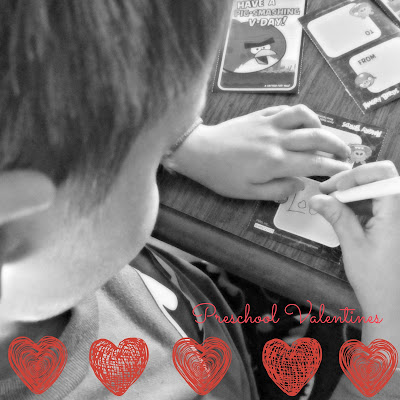 i signed bryce up for kindergarten today. since he is third in line, i don't feel sad or nervous about him going off to school. (it kind of feels AWESOME, except for the fact that i feel i am doing the three of them a dis-service by sending them to public school in the first place. but, yeah. that is another post for another time.)
triston and jackson picked out their valentines at the store last week and bryce jumped on the bandwagon: ....favorite characters that come with tattoos!? my kids were totally in despite my pleadings for the ones with pencils instead. ...and the first place jackson put one (because there are always extras) was right smack dab in the middle of his neck. wth?  seriously. i am raising a convict, with that one.
anyway, of course i let bryce pick out which ones he wanted, too, because a little light bulb went off over my head and i thought, "yes! writing practice". my kid hates anything that might be "school", so i have to find creative ways to get him to do stuff.
and it worked. oh, it worked so good: he was happy to pick out each valentine for each specific person and write each person's name - with my help, of course - and then write his own name a bazillion times.
and so what if i will have to drive all over the freaking county to deliver these valentines on v-day next week or spend a bazillion dollars on stamps to mail the others out? my kid was freaking happy to write today!
i am planning a special valentine's day for my guys. really, it's probably not that spectacular: a fun table cloth and tableware, seriously yum food and dessert and at each place setting will be a brand new book (chapter for the older boys, a learn-to-read for the preschool kid, and a board for the babe) and some chocolates wrapped up with some ribbon. and for my main guy - well, that's a secret. ;)
anyone else got any ideas for their kiddos?
........................................................................................................
some of my 'mom' tips were featured in an online magazine article - seasonal shortcuts. check it out!
and i am making some headway on circle of mom's top 25 - click on the big pink button to the left and vote once a day until feb. 14th. thanks!
at February 06, 2013 No comments:

the gift of an ordinary day 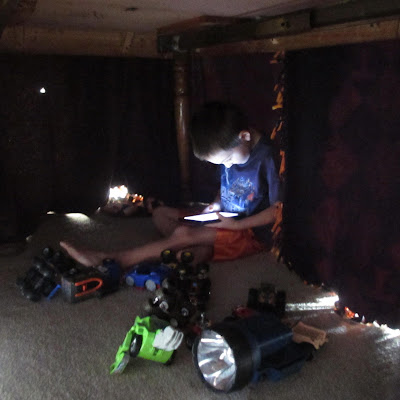 we're pretty much doing nothing today - making tents under the table and catching bryce with my kindle fire, cleaning, watching pbs, and folding laundry. somehow those make for the best days? i once read a memoir titled, The Gift of an Ordinary Day and it stuck with me because these silly little days i am blessed with truly are gifts. even if i do question my sanity on most of them.

vote for me! over to the left is a big pink button. i'm in the running for circle of moms top 25 funny mom bloggers. i nominated myself, which sucks because one year someone i didn't know actually nominated me. i don't expect many votes because the mom bloggers in the running are like, actually
funny, but just being a contender drives traffic to my blog, i'm sneaky like that.  but if you do feel so inclined, you can click on the button and scroll waayyyy down to the bottom near the 170s -180s range and vote for my blog. you can vote once a day until february 13th. thanks!
at February 04, 2013 2 comments: