I found this unpublished post in my drafts. Not sure why it was never posted, but it deserves to see the light of day! Almost 8 years ago...I'll have to do an update post on our anniversary this year, 8 years later from when I wrote this one. 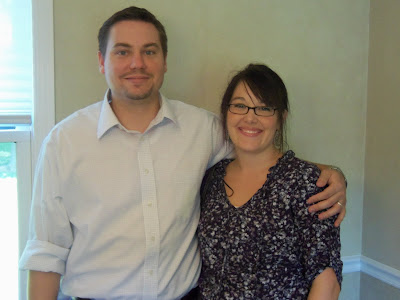 ﻿
since it has been nearly three weeks, i suppose i should post about our 8 year anniversary.﻿ i get in a weird funk sometimes and i don't post about important events or outings. but 8 years is worth it's own post, yes? yes. we made it past the 7-year-itch, so i am calling our marriage successful. :)

i didn't want to post this picture for three reasons: the first is because travis looks really weird. the second is because i look really fat and my hanger thing is hanging out of my shirt. and the third is because it totally looks forced, which if my memory serves me correctly, it was. we were ready to walk right out the door and i said, "oh, but wait!" and, i swear we didn't look that bad when we went out. also, i had some smokin' dangly earrings on, too, that you can't even see. the photographer could have alerted that we were about to take a crappy anniversary picture, you know. :)

we celebrated at a favorite restaurant and had the most delicious dinner and dessert ever. but i always say that don't i? i can't help it, it really is the best ever right in that moment. we talked about all kinds of nothing, which is the best kind of conversation. and we talked about important stuff, too, like what will the next 8 bring. and i won't lie, i did some people watching, too. i just can't help it and since we were sitting in the bar and a game was on, travis was entertained a little, too.

moved x amount of times. i have literally lost count.
have had 4 beautiful wonderful healthy baby boys
survived law school
finally bought a house and settled in one spot
got a dog
survived an election (where t was gone everyday for 3 months from sun up to sun down)
made our marriage & family for time & eternity
have argued and made up probably more times than average
have had two gardens - 1 a dud and 1 a half-dud

Emma, while she's in the bathroom: "MOM! I just washed my underpits!"

Nash, to Emma: "Hey Emma, go grab me a pancake" (They will eat them plain with nothing on them) and in response, Emma says, "Who do you think I am, your servant?!"