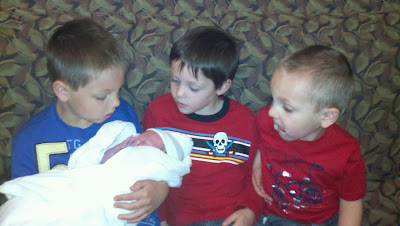 I'll post all the deets later...and some real pictures instead of the ones off our cell phones. Happy Easter!
at April 23, 2011 8 comments: 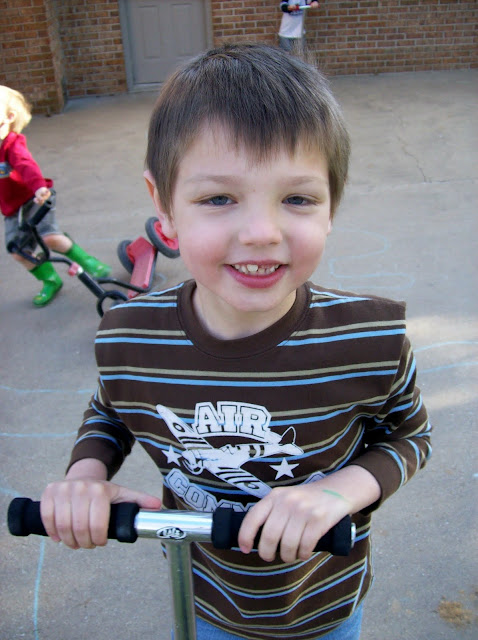 This guy told me over the weekend that his best friend at school isn't his best friend anymore because he punched and kicked him at lunch last week. Whhhhhaaattt?
The compassionate parent in me wanted to tell him to just stay away from him and to make sure to tell a teacher if someone does something that isn't nice. The mama bear parent in me wanted to tell him to take care of business if someone is bullying.
And the rational parent in me totally realized that Triston may have had something to do with it AND he is freakishly strong and throws a mean punch and maybe option number 2 isn't such a good idea AND kids are kids and boys are boys and next week will probably be best buddies again with his ex-best friend. I went with rational parent.
He beat my high score on Bop-It this weekend, too, and made 4 goals at his soccer game on Saturday. 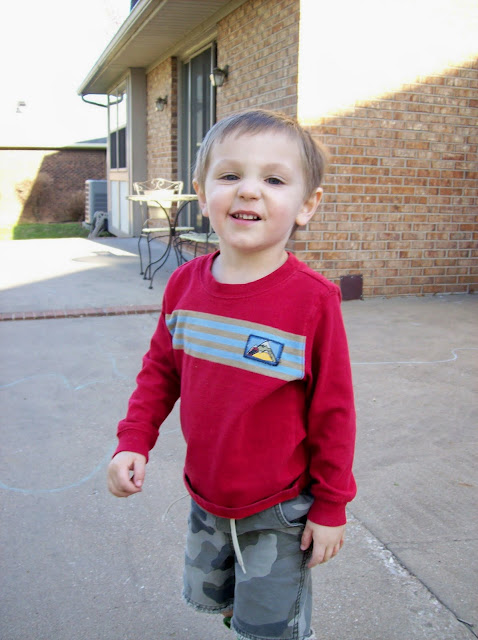 This one just became so rotten I don't even know what to do with him anymore. He started stomping his foot at me when I tell him "No". He started throwing himself on the floor when I tell him he can't have whatever he wants {which is usually a toy someone else has}. Suddenly, he won't stay in time-out anymore. I will sit him in time-out and turn around to set the timer and turn back around and he has bolted. For a huge pregnant lady, this is a problem. And sometimes he hides when he runs away and I can't find him. So, I've turned to lures and when he finally comes out of his hiding place, I snatch him up and physically hold him in time-out until the timer goes off. While he is screaming, of course. This has been going on for a couple of weeks, but it culminated this weekend. He might sense change coming or he might just be 3 and needs a few more whippins. Plus, he just got a buzz cut and looks like a little heathen child. Doesn't help his cause any. 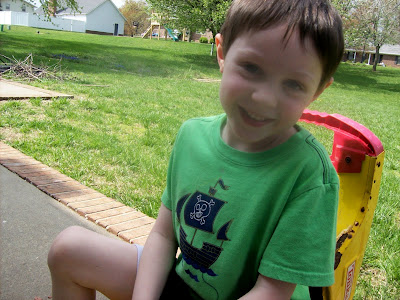 And Dirty J, as we like to call him, did just fine over the weekend but he is dirty all the time and I am tired to cleaning him. The kid gets filthy in whatever he does. Play-doh? In his hair and everywhere on the floor. Painting? All over his clothes and the table and usually the walls. Eating? All the food somehow gets pushed off the side and all around his plate and off on to the floor. Outside? Don't even go there. Dirtiest one at his soccer game every single time. But he is happy and healthy and creative and I think that's just his outlet. He told us he didn't fall asleep AT ALL Friday OR Saturday night and makes up stories that make me laugh and laugh.
And the littlest guy has sent me to triage twice in the last two weeks. The first time with some crazy pain in my side that made it difficult to do anything but cry and the second time with strong 4 minute contractions. My doc chalked both of these up to a bladder infection, gave me antibiotics, and set me up to be induced. How do you have a bladder infection and not know about it is what I want to know. I had no symptoms.
And then on Saturday, I got all retarded and decided to play basketball with the boys. All the running, jumping, and shooting made me want to die later, but we had fun while we were doing it.
And now, we're ready for the week. For sure.
PS. That little pink circle over there ------> is a "vote for me" button. If that's your thing, to vote for people you know, hit me up. I submitted my blog to be a top 25 stylish mom blog, which is just hilarious, but I'm losing it and baby #4 might send me over the edge and then I'll never get it back. If you have any pity for this kind of thing, help a sister out. You'll have to scroll down to find me...
at April 17, 2011 2 comments:

Email ThisBlogThis!Share to TwitterShare to FacebookShare to Pinterest
Labels: 4th pregnancy, my boys

I haven't really had the nesting instinct kick yet with this kid in the same way it happened with the others. Maybe because it is my 4th pregnancy, or maybe because it is my 4th son and "I've been there, done that" so to speak. But, actually I'm thinking that is has more to do with the fact that time is just freaking flying by and tomorrow I'm going to wake up and realize that I'm in labor and don't even have a car seat yet. (But that one is actually covered, thanks Amber!)

But, last week this chick took me as her guest to a pre-sale consignment event and the nesting instinct totally got kickstarted. I scored a Bjorn for $15 and a cute little bouncy seat for $10, plus an extra diaper bag and a few little things. (And can I just say, hanging out with her for a bit was the most fun I've had in a long time. Old friends are a good remedy for....everything.)

Now, I'm feeling the heat. In just a few days time I've started cleaning out closets, getting all crafty, prepping to re-vamp some furniture, stocking up on baby goods and organizing organizing organizing, which makes my husband really happy for some reason.

If only I could keep my own (two) closets organized. 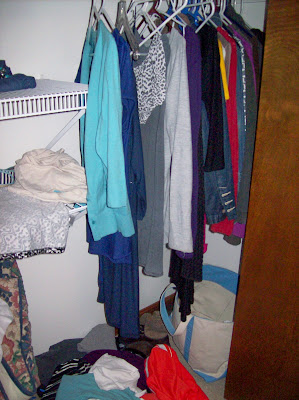 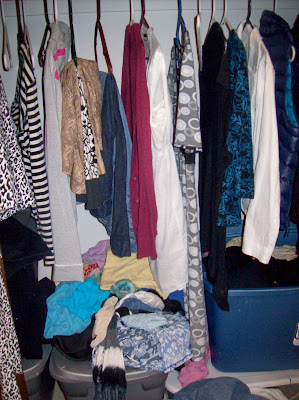 It's really quite sad that a grown person's closet looks like this...but I bet my mama would say that looks pretty normal. I mean, she was around for my high school years and tells scary stories about not being able to see the floor in my bedroom until I moved out. And when your clothes decide not to fit you like, all of a sudden, what else can you do besides try on everything at once and then decide you are too tired to hang it all back up? Am I right or am I right?

Back to the nesting.

It's pretty perfect timing, all this nesting business, because quite to my surprise I walked right in to a baby shower today honoring, well...me.