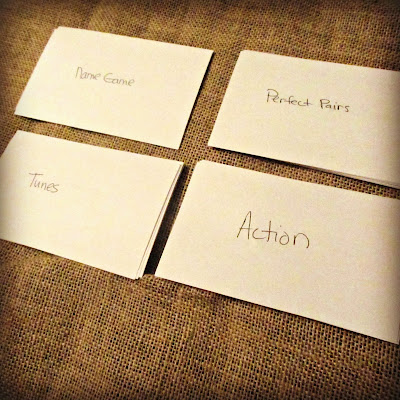 Ellen Degenerous came out with a game called "Head's Up! Party Game" and friends: it is hilarious. My sis introduced us to the game over Christmas, when we played it at her house and laughed until we were all crying.
The premise is that you have to guess what is on your card via your teammates. They aren't allowed to say what it is - only giving you hints by talking around it, acting it out, or humming a tune. the more cards you guess correctly, the more points your team collects. Highest points at the end wins.
So. Fun.
At the end of our game, Triston started watching us and jumping in when he could and thought it was a ton of fun, too. Fast forward to New Year's Eve, when I was planning some fun games for us, and a  DIY *kid's* version was born.
In the original game, plastic headbands hold the card in place on your head so that your teammates can easily see what's on it, while the "it" person cannot. We own the kid's game Hedbandz, so I just used the headbands from that, but you could easily play without any headbands at all: the person who is guessing sits in front of their team, while they show each other what is on the card before trying to get the "it" person to guess what it is.
We also used the sand timer from Hedbandz, but any game timer or stop watch can be used.
Using a pack of .98 cent index cards, I wrote one of four categories based on the original game on the side of one card: Action, Tunes, Perfect Pairs, and Name Game. On the other side, I wrote something that correlates to the category.
Action: simple actions kids will understand: playing baseball, swimming, brushing teeth, clearing the table, ect.
Definitely choose actions specific to your family that your kids will know. And no talking!! This category is miming the actions, only!
Tunes: Just like in the original game, this category only allows teammates to hum a tune. I chose songs my kids would know - Scooby Doo theme song, Happy Birthday, some church songs, and a few pop songs like Ice Ice Baby. This is the hardest category, but so funny!
Perfect Pairs: things that go together: chips and salsa, macaroni and cheese, salt and pepper, Mickey and Minnie, Scooby and Shaggy, ect. You can talk throughout this category, you just can't say the name or rhyme the name of whatever is on the card!
Name Game: This is the name of a person your kiddos will know. Choose from celebrities they might know, the president, church leaders, friends, family, teachers, acquaintances, ect. - just don't say their name! You could even use the names of things like a shark, or French fries, or whatever - they just have to say the name of whatever is on the card. Again, no rhyming!
I made 12 cards for each category for my 3 older boys to play. The more cards, the better. If you have a lot of players, make a lot.
Rules: we let each kid take turns choosing what category they wanted and played until the timer ran out. If they guessed a card right, we went on to the next card in the pile or they could pass if they didn't know it and go to the next card. Whoever wasn't "it" helped give clues. Whatever cards they guessed right, belonged to them as points. Whatever cards were left over went back into that pile. The kids took turns (with us parents helping give clues for everyone) until all the cards were gone. Whoever had the most cards at the end was the winner.
If you have an even bunch you can divide into teams and play the same way for an even more fun version!
The kids loved it and us adults were cracking up watching them. We're planning on trying it out again this weekend with some friends and their kids. Hoping it will be just as funny.
Definitely add this game to your collection. It's only $14 on Amazon right now and so so fun!
at January 02, 2014 No comments: