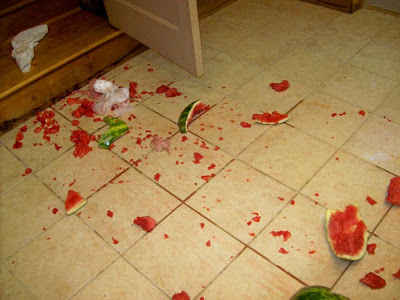 half-way through the clean-up
true story.
july 2010 - it had been a long exhasting day that included the grocery store. the boys were 6, 4, and 2 then, so they were just about the right age to drive me completely batty when in public. we were living in travis' parents rental home while anxiously planning out a hopeful near future: a campaign for county prosecutor and a fourth baby. so, tensions were high. and let me just tell you a thing about that place: although that house is beautiful and the land is gorgeous (like, magazine-pretty), it is not really set up for children. The floor plan is kind of wonky since it was built in three seperate sections, the first, a rustic room built entirely of logs, rumored to be posey county's very first post office. there are no hallways, just rooms that lead into the next. the kitchen and eat-in dining area, right off the log room, is big: tall ceilings and a built in corner pantry, it is actually quite lovely, or will be when renovations are done.  inside the kitchen is a  crazy-steep open wood staircase that descends into a tile floor in the basement that has cedar woods walls, which served as the boys playroom.﻿
and that is really where the heart of this story takes place.

july, in the midwest, is synonomous with: THE BEST WATERMELON ON EARTH. and on my way home from the grocery store, i had stopped at a road-side market and paid $5 for a monster watermelon that had me and the boys licking our lips all the way home and me answering questions about it: "yes, we will cut it up before dinner. yes, you can have some. no, triston doesn't get the whole thing"

when we finally arrived, i lugged all the groceries in the house while the boys played in the front. as i started putting stuff away, i rolled that watermelon to where the pantry is and let it settle right there on the cold tile floor. mistake # 1 - it was right in front of the staircase.

after my job was done, i yelled for the boys and they came inside for an afternoon movie while i caught up on some laundry (which is also located in the basement) and got some peace and quite. mistake # 2 - i left them unchaperoned. mistake # 3 - i actually thought i could have peace and quite with young boys in my house.

as i was busy sorting and folding, i heard something hard bouncing down the wood steps. i started for the door to reprimand the culprit because we had told them to be careful on the new hardwood floors that were only a couple years old.

but....there was no reprimanding. i watched our giant watermelon flop out onto the tile floor and literally explode before my eyes. it was on the ceiling. it was on the walls. some part of that watermelon covered every square tile on that floor. i stood there, shocked, not believing what my eyes were actually seeing and THEN i saw a little head peek around the corner of the doorway, just the top of his head and his eyes.

"jjjjjaaaaaaccccCCCCKKKSSSSSOOOOONNNN!" i started in, but couldn't even finish it. i had no words. my mishievious child had struck again and there was nothing i could do except start cleaning it up. and cry. i actually started crying!

"mom. i'm sorry. mom, i didn't do it on purpose. mom. mom, are you mad at me?" with wide eyes he  peppered me with questions that i didn't even answer. bryce and jackson came to see what had happened and started hooting and hollering. i think triston even tried to chase jackson down because he saw that i was upset. i secured all the boys in the living room upstairs, got a broom and paper towels and every cleaner i had in the house and started the massive clean-up. half-way through, i thought to grab my camera. i needed proof that this actually happened.

the clean-up actually only took about an hour. i picked up all the big pieces and put them in a trashbag, then swept up everything else. i picked pieces off the walls and wiped down all the toys that were covered in juice and watermelon matter. once only the juice was left on the floor, i used a whole roll of paper towels to soak it all up. then i had to just mop it - 3 times.

i am pretty sure this event shaped my current chocolate addiction. once it was completely cleaned up and things were back to normal, like my freaking blood pressure, i was able to actually look at my kids again.


but i didn't buy another watermelon for the rest of the summer.