We were getting ready for an event that was to start at 7. I, being the inexperienced mother that I most oft seem to be, was busy explaining that an event such as this--the end of season awards banquet held for Little League--was something exciting, something worth dressing up for. My goodness, Triston was getting ready to receive his first trophy. I mentioned the clothes I thought he should wear and was met with opposition--an all too common theme with that boy. It didn't help that Travis had just praised him for putting his socks and shoes on all by himself.

"Why do I have to wear something nice? I don't want to wear something nice. It's just a banquet!" Right. He just learned what a banquet was 5 minutes beforehand, but whatever, I had a baby to diaper and my own shoes to grab. Out the door we go, black Spider-Man socks pulled up his shins and all. "He'll learn one day," I thought to myself. 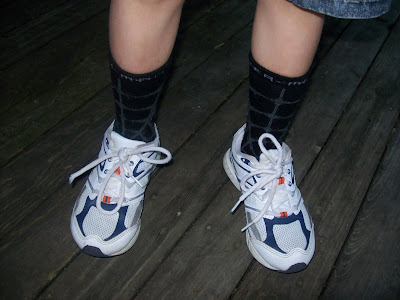 Upon arriving where this banquet was taking place, we weren't sure where to go. Thankfully, we were able to follow the sounds of many screaming children that were running wildly throughout the 4-H grounds. I instantly felt ridiculous for making the clothing an issue. This is what we saw: 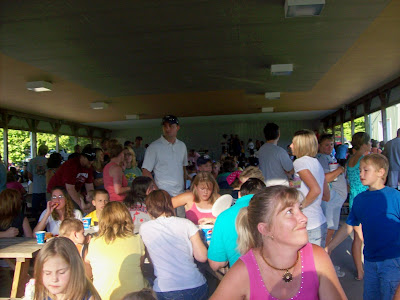 100+ regularly dressed people crammed into a tiny shelter house all waiting for trophies and wieners. We found a seat on the very last picnic table all the way in the back and waited for Travis to grab the boys a hot dog. 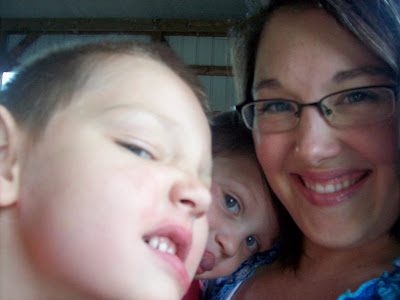 Then we waited for every girl of all the co-ed teams to get called first. Our boys were impatient, so we let them run around. And I sure am glad Triston did know what was up with the appropriate apparel because there was a lot of mustard and fruit punch smeared on shirts and little faces, a lot of running, a lot of falling, and a lot of crying by two tired little boys who didn't want to wait for something they weren't receiving. 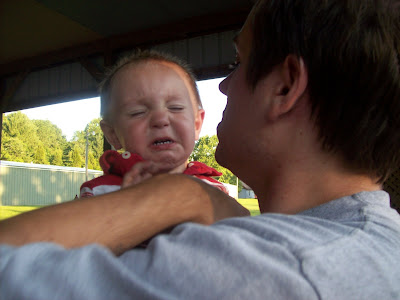 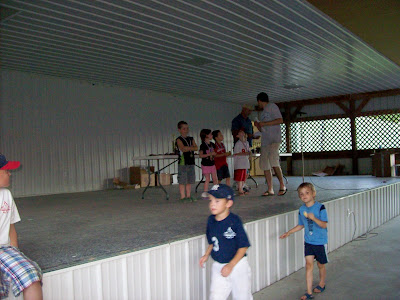 It turned out to be a really good time. I earned another notch on my experience belt with this kind of setting and Travis got to engage in some Daddy Duty as he stepped in for our coach, as the announcer, when he couldn't make it. Triston got his medal for a well-played first season of T-Ball, and maybe more importantly, it seems that the day came when I'm the one who learned the lesson I should have been teaching: Don't fuss over petty stuff. Let them be and they'll do just fine.
....even if they are wearing black socks pulled all the way up their shins. 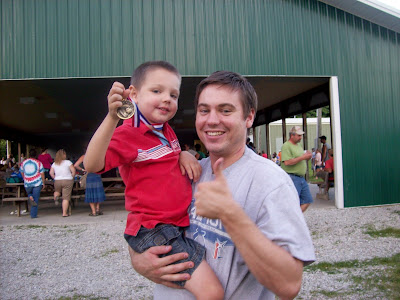 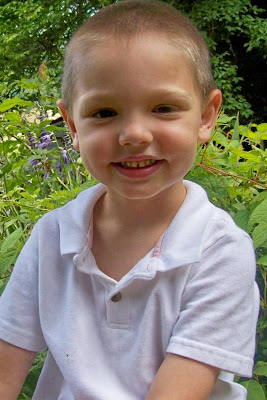 Triston starts school in just 4 weeks and I am scared. For the last few weeks, I have gone over (...and over) a mental checklist of all the things I have taught him and the ones I should have taught him. Tying shoes? Check. Cutting with scissors carefully? Check. All the ABC's, 123's, shapes, colors, reading and writing simple words, ect.? Check. Going to the bathroom all by himself? Check. Always be nice to everyone, especially girls? Check...usually. But......
He wants to ride the school bus. I don't know school bus etiquette!
He likes to be funny. Is he going to be the weird kid at the lunch table sticks carrot sticks up his nose just to get a few laughs? Oh!
What if he gets lost coming back from the bathroom and ends up outside?
He wants to be the leader All. The. Time. How is he going to deal?!
8 hours of school seems like a long time for a 5 year old to be away from his mom. Right?!
Goodness. This is going to be an interesting last month.
Help!