we don't mess around 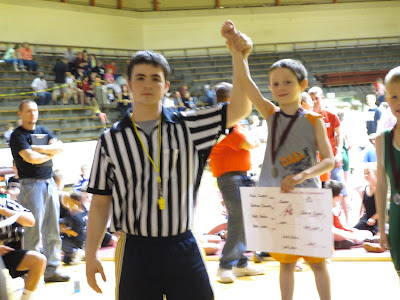 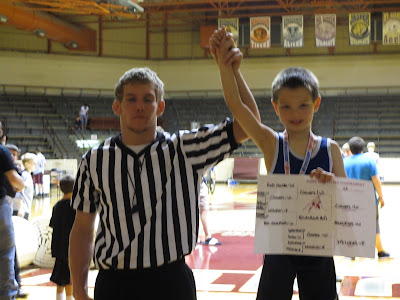 they definitely mess around when it comes to soccer and baseball and basketball and maybe even football - and sometimes it drives me nuts - but these boys take wrestling pretty seriously. It paid off - two city champs in each of their divisions. jackson went undefeated the whole season and then wrestled the winner of the other bracket in his weight class - beating everyone in his weight in the whole city. triston did get beat a couple of times - by a 5th grader, i feel i should note that because he is only a 2nd grader and still a little clumsy at times and a 5th grader seemed like a giant compared to him, but he learned a lot from those losses.  he was ready to roll at the city meet and came out on top. of course, even if they didn't win, we still would have celebrated - wrestling is hard work and there were lots of practicing, patience, and some tears throughout the season. not to mention a few illegal moves like claws to the face. sheesh.
a wrestling parent that is involved with the elite club in our town actually grabbed triston after he won and brought him over to us and said they wanted him on the team. it was a nice compliment for triston - i'm pretty sure i saw his chest puff up. triston and jackson, both, want to wrestle in the elite club that starts in the fall - which means wrestling 7 months out of the year instead of 2 and lots of traveling, but how could i say no to these sweet little (tough!) faces?! ﻿ 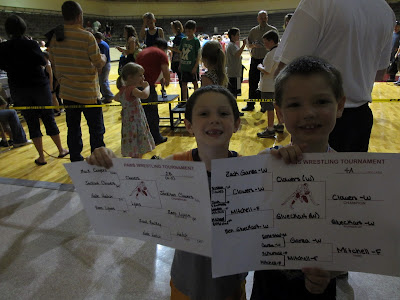 that was on monday night. tuesday night my mom and i went to the elton john concert and i nearly died. saying the concert was good is an understatement. it was the best live music i've ever heard or seen. elton and the whole band made it look completely effortless - they played for 3 hours straight with no breaks and just rocked the whole night. i've been subjected to crappy music via pop radio stations for too long. electronic sounds that talk about getting drunk, having sex, hot girls, - cheap. this was amazing.
and i just have to show this video because i am still amazed by it. these two HOT guys can play...a cello.
elton john called them personally to go on tour with him and his band. i nearly died watching this live, too. the whole thing was just soul-moving, which is a really weird and artsy thing to say, but when you stay home all day with kids and listen to pbs and the lion king soundtrack (which hello! elton john, again!) you forget about all the things that move you. you know?

now go google those two hotties - with or without you was pretty awesome, too.
at March 21, 2012 2 comments: